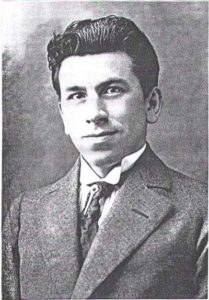 Martinus (Thomsen) was born in the small village of Sindal in the north of Jutland, Denmark in August 1890. His family was poor, so he had only a very basic education. He was trained as a dairyman, and in his twenties, he worked at dairies all over Denmark.

When he was thirty, he had two profound spiritual experiences, in which he felt that he left his physical body and entered a divine level of existence. These experiences enabled him to see beyond the physical plane and into the spiritual plane where everything has its origin. He had, in other words, attained cosmic consciousness.

The experiences changed his life, and through support from friends, he was able to dedicate the rest of his life to writing down his visions or analysis, as he called them. This meant that he spent 60 years writing, and he wrote every day from 4 in the morning till 5 in the afternoon.

When Martinus was in his 70s he received a very strong impulse that his complete work should be called “The Third Testament”. It is new directions to humankind and a sequel to The New Testament. At his death in March 1981, at the age of 90, Martinus´ complete work comprised more than 9000 pages of spiritual wisdom. Everything was written in Danish.

The work is in the process of being translated into 20+ languages, and a lot is already available in English, Spanish, German and Swedish,but at the moment (2016) his complete work is only available in Danish.

The Martinus Institute is in Copenhagen, Denmark and its aim is to publish and translate the books and keep them unchanged for posterity.
You can find a complete list of Martinus´ books under Bibliography on www.deathisanillusion.dk and www.martinus.dk