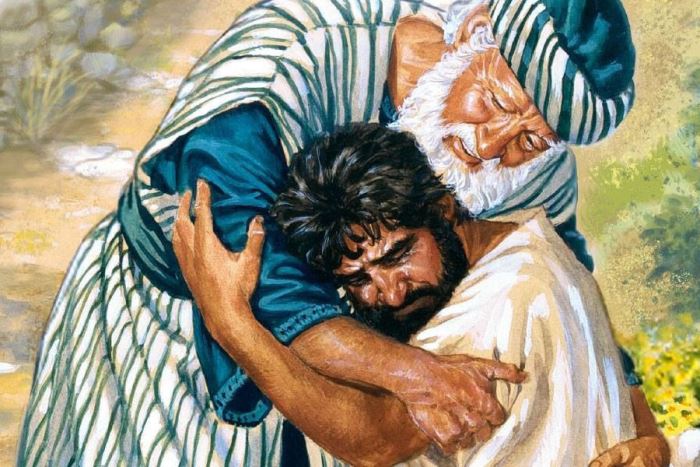 A lot of us may know the parable of the prodigal son from the Bible, but we may not know the interpretation that Martinus gives it. Jesus told the parable to his disciples, and for me it had a profound impact once I read Martinus´ interpretation. I cannot read the parable without crying, because that prodigal son is me. But obviously, it is not only me, it is all those who have done the same as the younger son in the parable: asked for his inheritance, left the house of the father and spent the money on lose living, drinks, whores and false friends. In other words, the parable is about all those who have squandered their inheritance, spent it unwisely and lived to regret it.

In the story, a father has two sons, an older and a younger one. The younger son wants his inheritance, so that he can go out into the world and have fun. The father says ok, so the son goes out and squanders his inheritance unwisely. Soon there is nothing left. But then a great famine hits the foreign country where he lived, and he had nothing to eat. He sought work as a swineherd and envied the pigs their food. Actually, he ate their food with them and slept with them. After having suffered starvation and humiliation, he came to his senses and said to himself:  “How many hired servants of my father’s have bread enough to spare, and I’m dying with hunger! I will get up and go to my father, and will tell him, ‘Father, I have sinned against heaven, and in your sight. I am no more worthy to be called your son. Take me as one of your hired servants.'”

In Martinus´ interpretation the prodigal son is all those who, through a very materialistic lifestyle, have squandered away their inheritance, which is their belief in a higher ruling principle or God. They have lost faith in the divine, they have become hard-core egoistic materialists and focused only on things, goods, money and having fun. They have left the house of the father so emphatically that they have become godless atheists. They have become devoid of the last shred of the faith they once had, and they could not care less. Who needs God, anyway, they say and with this attitude they live for a while, which may be a few incarnations.

Eating with the pigs and being spiritually bankrupt

But then disaster strikes, a war comes, the stock market crashes, a tsunami hits the shore, the harvest fails, or they are hit by an accident. Or they simply find that they are spiritually bankrupt. When they have lived for a few incarnations as godless atheists, they begin to hunger for some kind of spiritual support. They need nourishment for their soul and no matter how rich, successful and powerful they have become, the spiritual hunger will not go away. There is no spiritual consolation in a fur coat, a palace with a swimming pool or a Ferrari. Also, there is no spiritual consolation in a book about chemistry or physics.

At the point where we find ourselves spiritually bankrupt, then we decide to return to the father. But we do not return in the same mental shape as we left. We return with the attitude:I am no more worthy to be called your son. Take me as one of your hired servants.

We return humble, wanting to serve and help, unwilling to have privileges. We return reluctantly, because we fear that our father will be angry with us and reject us. But much to our surprise, he is overjoyed to see us. He throws a party to celebrate our return, he praises us and gives us lavish presents. And he says: “Quick! Bring the best robe and put it on him. Put a ring on his finger and sandals on his feet. Bring the fattened calf and kill it. Let’s have a feast and celebrate. For this son of mine was dead and is alive again; he was lost and is found.”

There are no hard feelings from the father. He welcomes us back. He is overjoyed to see us. But why is he not just a little bit angry with us? After all, we did spend all the inheritance unwisely and ate with the pigs. Well, he is not angry because he knows that this is the way we learn. We can even say, this act of leaving the house of the father is what we all have to do in order to learn valuable lessons and most of all to learn humility. When we are ready to be of service to others and are humble and kind, then we are ready to return.

This means that the atheist stage is one most of us have to go through to learn to become wise and humble. If we had forever lived a life of the privileged son, at the bosom of the father, then what had we learned of the world? It is only through our own experiences and sufferings that we learn. We do not learn anything if we just stay at home on the sofa.

The older son did not leave home and he stayed on the sofa. He was very jealous when the father threw the party for the younger son, because he did not think that his brother deserved it. But it is now the older son´s turn to leave the house of the father. He has to. He has to go out into the world and squander his inheritance as well. Without hardships and sufferings there is no harvest of experiences, no consequential wisdom and no final humility. We do not become humble if we live forever with the privileges of a son. We become pretentious, smug, proud and conceited.

When I found the Martinus material in 1995 I had been an atheist for many years. But still I was a searching soul and when I had found and read Martinus´ work I was so grateful, I have no words for it. Never in my wildest dreams had I imagined that this type of knowledge existed. I was overwhelmed by the magnitude of it because it all made sense. It appealed to my intellect like nothing I had ever read. I can safely say it changed my life.  It made me return to the father and that was a big thing, because I had been so lost. And look, he welcomed me back even though I had been away for a long time and been very naughty. He did not care about that, he was just happy that I came back. I felt that so strongly that I cry whenever I think about it. But, of course, I had changed since I left. My ´eating with the pigs´ had made me wiser and humbler. But the father had also changed. He was no longer the angry and revengeful God I had been brought up with, but an understanding, all-embracing divine entity that forgave everything and was pure love.

I know that there are many people out there like me. They yearn for spiritual nourishment but the religions of old do not appeal to them.  The old religions have no appeal because they only tell us to believe without a logical foundation. But once we have spent time away from the house of the father, we can no longer be seduced by the magic of blind faith. We need logical explanations to the mystery of life. We need to know why we are here and what we are doing here. This is what Martinus tells us. And this is why I have written my books about the Martinus material. They have been written for all the prodigal sons out there, who, like me, were lost and have been found.