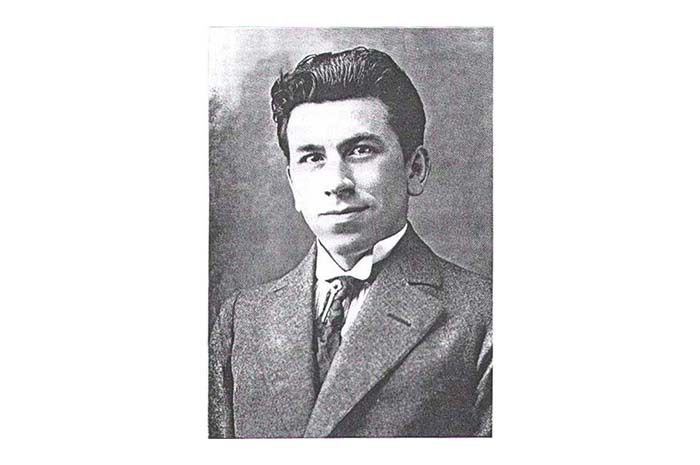 I just want to write a little bit about who Martinus was, so that it can become clear to more people just how extraordinary his appearance on this planet was. His mere appearance signifies much more than just the birth of another human being.

Martinus was born in the north of Jutland, Denmark on August 11th 1890. He was illegitimate, born in poverty, never knew his father, and his mother had a lowly servant’s job. Martinus had no formal education and he never studied anything. He was trained as a dairyman, earning a meagre wage to support himself. However, as you will discover if you keep reading, Martinus’ astonishing legacy of work will leave you in no doubt that one can attain the highest insight without ever having studied.

What is profoundly important is the spiritual experiences Martinus had in March 1921 when he was 30 years old. Despite his lack of education, inside him Martinus had a deep desire to understand life and God, so he decided to sit down to meditate on the concept of God. Having blindfolded himself, he sat down in his wicker chair and concentrated his thoughts on God. He was suddenly transported from his humble lodgings in Copenhagen into the presence of something utterly and unquestionably divine. A white light encompassed him and out of it emerged the figure of Christ in the shape of a statue by Thorvaldsen, the famous Danish sculptor. The figure of Christ, shaped by millions of small sparkling lights, moved right into Martinus´ form and consciousness, and he could suddenly see the light from Christ illuminating the whole planet. He could see mountains, rivers and continents – all bathed in the light emanating from Christ. At a certain point Martinus´ consciousness could take no more of this high-vibrating energy, and he had to jump up from his chair and pull off his blindfold. Suddenly he was back in his humble room, but from then on, he would never be the same. The next day Martinus meditated again and this time he was enveloped by a strong golden light, and he felt sure that it was the consciousness of God, that he had somehow entered.

A permanent state of enlightenment

These two experiences would have been of no consequence to others, had they not left Martinus in a permanent state of enlightenment. After the experiences, Martinus felt that his consciousness had been expanded to not only encompass the physical world, but also the spiritual level beyond. Martinus was now able to look into the spiritual level where everything has its origin. He had achieved cosmic consciousness. Whenever Martinus had a question, the answer came to him immediately. He soon discovered that there were no questions he could not answer.

This fact alone placed Martinus in a new category among humans, but again, this would have been of no consequence to others, had he not spent the next 60 years of his life writing down the answers to all life´s big questions. When Martinus died in 1981, at the age of 90, he left a legacy of 9000 pages of spiritual wisdom. He called his work spiritual science or cosmology. He often referred to his writings as analyses. To support the understanding of his texts, Martinus produced 100 symbols that are beautiful coloured drawings, which illustrate aspects of the spiritual reality.

The most complete spiritual revelation ever disclosed to humankind

To those who have taken the time and had interest in studying what Martinus wrote there is no doubt that his work is the most complete spiritual revelation ever disclosed to humankind. Everything is there: the solution to the meaning and mystery of life, the analysis of the “I”, the core of who we are, the answer to what we are doing here, where we are coming from and where we are going, the master plan of life, why there is no death, why all life forms reincarnate, why there are unhappy and happy fates, how we create our fate, what happens when we die, why our divorce rates are soaring, why pansexuality is on the rise, why there simply has to be a God or creator and much much more.  The work of Martinus is really an inexhaustible fountain of spiritual insight. The insight revealed by Martinus vibrates on such a high level that it is impossible to see it as other than the ultimate truth about life, death and our existence.

A work to satisfy our growing intellect

Jesus himself announced the coming of a new world teacher 2000 years ago when he said to his disciples: “I have yet many things to tell you, but you cannot bear (understand) them now. But the spokesman, the holy spirit, that the Father will send in my name, will lead you to all of the truth and explain to you the things I have said.”

The mission of Martinus was to continue the mission of Christ and hence he saw Jesus during his spiritual experiences when he was 30. The mission of Martinus was to expand and add to the teaching of Christ so that they could satisfy people living today who are no longer able to just believe, but who have a need for a logical, intelligent explanation based on a scientific way of thinking.  The mission of Martinus was to write down the insights he had access to via his cosmic consciousness in such a way that they appealed to our intellect and not so much to our feelings. All previous guidance from the divine was meant to appeal to our feelings, so Martinus´ work is the first to appeal to our intellect, and that is what so many of us are yearning for right now. Many of us can no longer be seduced by the traditional religions because they do not nurture our intellects. But Martinus´ analyses do and they will appeal to truth-seekers, atheists and non-believers alike because of their overwhelming logic.

The mission of Martinus

This was Martinus´ mission: to write down the spiritual insight he had achieved via his cosmic consciousness. He was not to be adored or admired and he was not to be the focus of attention. He lived his whole life in humble obscurity and was not at all in the limelight. He needed to be left alone to work so that he could fulfil his mission. He was surrounded by a few supporters and helpers, but news of his existence never reached the general public nor was it meant to.

Not an object of faith

The work of Martinus is not an object of faith and he underlined time and again that he did not want anybody to just believe in what he reveals. He said that his work was an object of study and that it was only when his revelations were compared to what we can observe in the physical universe that they can become useful for us. He was not in search of proselytes and he clearly stated that those who were happy with their religion or belief system should stay with it as long as it inspired them. Martinus knew that not everybody is standing at the same level of evolution and that consequently not everybody has the same spiritual needs. But today there are people living on the planet that are in dire need of his teachings. This group will grow over the next millennium because as we evolve, our instinct, which carries our ability to believe, will give way to a growing intelligence. With a growing intelligence the religions of old will become depopulated and we are already witnessing this to a large extent.

The work belongs to all of humankind

When the pupil is ready, the teacher appears

As I am writing this, it is now 37 years since Martinus died. Since his death, knowledge of his work has spread slowly to those who are ready for it, because not everybody is. But over the next millennium the work of Martinus will become of interest to many more people and it will spread slowly as more and more become ripe to understand it. When the pupil is ready, the teacher appears, it is said, and that is also true in this case. As we live life after life and experience sad and happy fates and sufferings, we become more and more knowledable and wise. Our accumulated experiences are stored in our supraconsciousness and it accompanies us from life to life. When we have experienced much suffering, our humanity will grow and that, together all our other experiences harvested in former lives, will make us ready to study the Martinus material.

The existence of Martinus reveals that there is a spiritual level from where everything has its origin and that there is a loving Providence that keeps an eye on us and sends us help when we are in need of instructions and guidelines. We are not alone and left out, but are cared for by the divine.

The work of Martinus reveals that the universe is a much more magical place than most people have ever imagined. It reveals that there is logic, intelligence and love behind all creations. It also reveals why there are unhappy fates, misery and unlove. These things exist because in an eternal universe, there has to be contrast. We need to experience contrast in order to have an eternal ability to perceive.

The New World Impulse and The Third Testament

The work of Martinus is not to become a new religion because religion is based on the ability to believe. Martinus´ work is based on logic and it is to become the basis for a merger of science and spirituality. This merger will take place gradually over the centuries to come. Without the spiritual aspect, we will never be able to understand what life is all about.

We are eternal beings and behind our existence, there is a magnificent master plan. I have yet to meet anyone that has studied Martinus´ work, who is not totally convinced about its truth, magnificence and logic.

When Martinus was in his 70s he received a strong impulse from the divine that his complete work, the totality of his writings, was to be called The Third Testament.

The Third Testament will be our guiding principle for the centuries and millennia to come. It is a brilliant, completely convincing helping hand from Providence and we should all be grateful for it. There is nothing like it on the planet.

If all this sounds a bit ‘new-agey, consider how this humble, illegitimate, uneducated man, could go on, after his initiation, to produce a legacy of over 9,000 pages of the most profound spiritual wisdom ever written… many of the concepts still unheard of, unwritten, un-thought of – even by the greatest spiritual teachers of all time. The only way to find out the truth is to read some of his work and decide for yourself. You can begin by reading more of the blogs on my page, my books, and of course, Martinus’ original work. A new world awaits you!