The Creation of World Peace 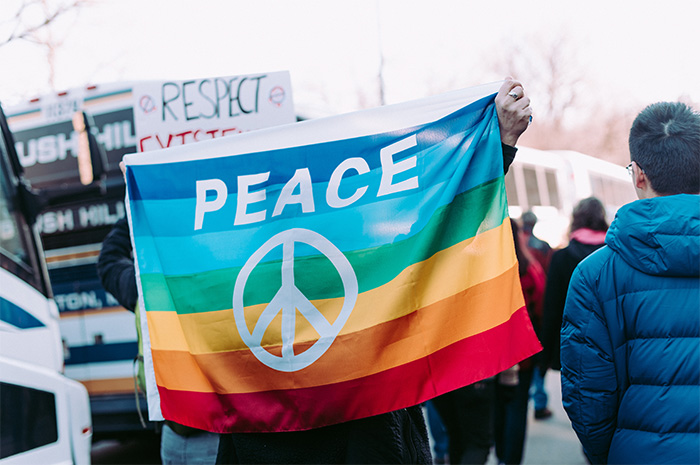 Will we ever have peace in the world? Is it at all possible to create a world where everybody is at peace with everybody? How do we create peace?

Can we create peace through armament and preparation for war?

Many people think we can create peace via armament and the production of more and more weapons. They think that if we have a balance of power via armed forces between the western and the eastern blocks, then we can create world peace through deterrence and fear. When each block is armed to the teeth, then nobody will dare to release the first shot. This seems to be the idea, and right now, we are back to the point where rearmament is taking place. The military budgets are rising and all NATO countries have to set more money aside to strengthen their armed forces. More money is poured into preparation for war, more weapons are bought and more personnel are prepared for active duty.

Is that the right way to create peace? Do you create peace via increasing military budgets? Do you create peace by preparing for and going to war? If we look back at history, the answer to those questions is a resounding no. In the same way as you cannot extinguish fire with fire, you cannot eliminate war with war. In order to extinguish a fire you need the opposite of fire: water, and in order to eliminate war you need the opposite of war: a peaceful and loving attitude.

A balance of fear

But, you may now say, we create peace when both sides have the same amount of weapons and therefore there is a balance of power and none of the enemies dares fire a shot due to the fear of retaliation. Then we have peace. But that is no peace at all. That is a balance of fear. We have not eliminated the idea of having enemies, indeed the picture of our enemy is big and strong in our mind. We have not removed the enemy, and if he were to shoot at us, we would shoot back and kill him. This is not a situation of peace, it is a cold war that can spark into a warm war at any moment. ´Peace´ is held in check by fear. It is no peace at all.

The foundation for peace

Will we ever have peace then? Yes, we will. According to Martinus, there will be world peace in 500 years. And how will this peace arise?

The first step towards real and lasting peace is to eliminate the concept of enemies from our mentality. When we no longer see others as our enemies but as our fellow human beings, then the foundation for peace will be laid. When we carry peace in our hearts then we have started a process where the next step is forgiveness. The ability to forgive is a prerequisite to the creation of peace. We have to forgive and stop all thoughts of retaliation. Revenge and retaliation only breeds more conflict and war, it is not the way to peace. Only forgiveness can create peace. We might find it hard to forgive certain persons, but then we can remember that we ourselves may also have a need for forgiveness, and that when we forgive others, we ourselves will be forgiven. What we do to others, we eventually do to ourselves. The law of karma decrees this and it is a well-known fact that we reap as we sow. If not in this life, then in the next.

Those who carry peace in their hearts, who can respect and love their fellow man and forgive him for what he might have done, are the foundation on which world peace will arise. There is no other road to peace.

The sheep and the goats

Those who carry peace in their hearts belong to the group that in the Bible are called the sheep. This group is growing every day and one day its numbers will surpass the number of the goats, who still think that we need the military, weapons and power. The real power belongs with those who can forgive, those who can radiate universal love and who see all other living beings as their brothers. The future belongs to those who are compassionate and who cannot stand to see the sufferings of others without lending a helping hand.

One day, this group of ´sheep´ will have reached critical mass and they will outnumber the goats.  When compassion, help, solidarity and universal love have overtaken greed, racism, a lust for power and egoism, then we will be well on our way towards peace on Earth. This promised land will come in some 500 years, says Martinus. It will come as a result of our own sufferings, because when we ourselves suffer, we will be reborn with an ability to express compassion. In this way, we are all on our way to becoming compassionate, all-loving beings. In this way, we are all, each and every one of us, subject to a process of perfection. We are not there yet and we are not perfect yet, but we are on our way, and each time we can forgive and demonstrate tolerance, compassion and universal love, we have come one step further along the way to world peace.

Martinus says: ”The realization of your own mistakes is the fastest way to get to love your neighbour as yourself”.

When we take a closer look at our own mistakes and realize that we have made many, then it becomes much easier to forgive others their mistakes. We all make mistakes, no exception.

“But I tell you, don’t stand up against an evil person. If someone slaps you on the right cheek, turn to him the other cheek also”. Matthew 5:39.

This was told to us 2000 years ago and we still haven´t learnt. Maybe now is the time to really grasp this concept and start practicing tolerance, empathy, understanding for the sufferings of others and universal love. There is no other road to peace on Earth.